Institutions are started with a vision and St. John De Britto’s A.I.H.S, in Fort Cochin was the vision of the then Bishop Dom Jos Viera Alvernaz. Accordingly with the support of a few members of the Anglo Indian Community and ably assisted by his secretary Father Jose Maria Das Neves, the Bishop brought into existence St. John De Britto’s Anglo Indian Boys High School on 15/01/1945 closing its first admission with 96 pupils on its roll covering six classes- LKG, UKG and Std I to Std IV within the old schedule of scholastic divisions. The school was governed by the European and Anglo Indian Schools Exams of the Madras Government and continued to be so till 1985 (the word ‘ European’  stood deleted in 1949 ) when it opted for SSLC Exam of the Kerala Government.  In the interim the divisions of the classes underwent a change from time to time ie., Std I to Std XI and subsequently to be stabilised as Std I to Std X.  Initially Mr Mathew Fernandez of vintage background was recruited as the Headmaster to set the wheels in motion.
In January 1949 the school was handed over to the religious order of the Sylvestro Benedictines of the Ceylon Province of Kandy and was well managed by very Rev. Dom. Franco Perini OSB followed by Rev. Fr. D.I. Robinson.  In 1953 the school was handed back to the Diocese of Cochin under Bishop Dr. Alexander Edezheth who had entrusted it to the towering personality of the then Vicar General Msgr. Francis Figueredo who subsequently relinquished charge as a manager in 1965.  During this period the school remained with the experienced educationist  Fr. Joseph Thottakath as the Headmaster.
The management later passed into the hands of various ecclesiastical of the Cochin Diocese notably,  Fr. Bernard Kakaramacherry,  Fr. Garvasis Mulakkara,  Msgr. Paul Kattisserry, Rev. Dr. Francis Fernandez, Rev. Fr. Josey Kandanattuthara, Rev. Msgr. Peter Thaikootathil, Rev. Msgr. Antony Thachara. The present Manager is Rev. Msgr. Peter Chadayangad. The school observed its Silver jubilee in 1970 and the Golden jubilee in 1994.
Our patron, the Bishop of Cochin, Dr. Joseph Karayil’s avowed interest in the field of education and religious dedication is an abiding inspiration.
The school now functions from its original premises once called “ Mrs Vieyra’s Bungalow”.
Many of the alumni adorn various levels of occupation and have held high positions of authority. Many of them are icons in the fields of Art and Culture, Business, Education, Healthcare, Music, Politics, Armed forces, Sports, and the Socio-Economic front.
Aim of the school
The aim of this institution is to impart moral and intellectual formation to the students and thereby mould them into disciplined citizens of the country.
School Uniform

The School coaches the students from Std I to Std X for the Secondary School Leaving Certificate ( S.S.L.C ) Examination conducted by the Kerala Government. 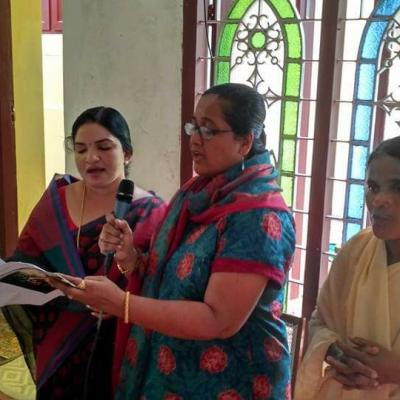 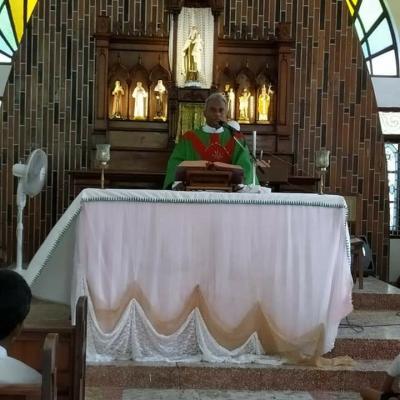 The celebrant is our very own Brittonian Fr. Chilton Fernandez... Now Asst.Rector at the Santa Cruz Cathedral Basilica ...Fort Cochin 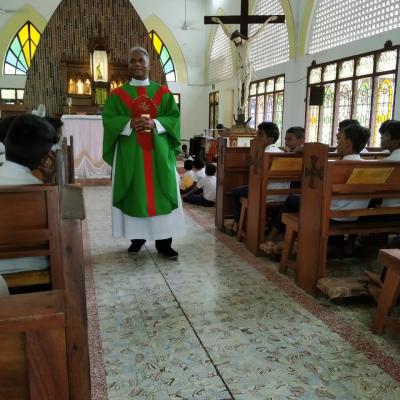 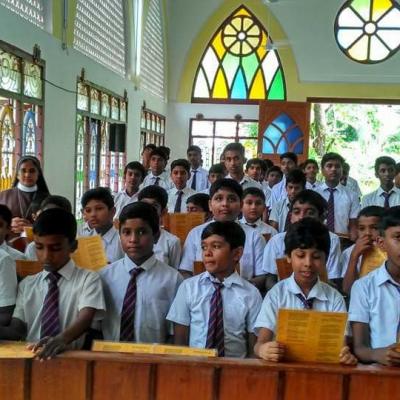 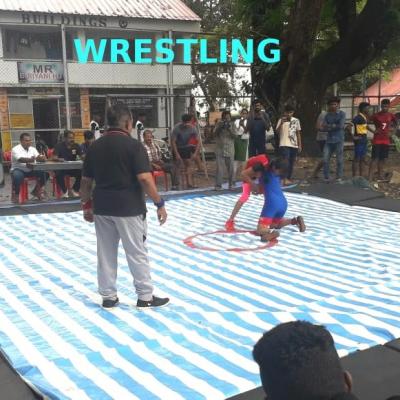 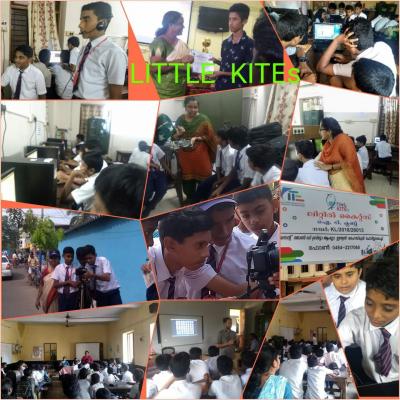